Art Around the Corner

While I was working on the Goya in the last post, the folks in charge of NGA's Art Around the Corner program came by to ask if I might be interested in doing some sessions with the students in the January session. I was thrilled to accept, because this program is an opportunity to make a real difference in some kids' lives through art. The NGA partners with DC Public Schools to bring 4th and 5th graders into the Gallery several times a year, not just to look at the art, but to participate in artmaking as they learn to see the world through artists' eyes. It is one of the most gratifying experiences I have had as a painter. To learn more about this program and to see it in action, here's a video made in 2011 which shows how it happens:  https://www.nga.gov/audio-video/video/art-around-the-corner.html 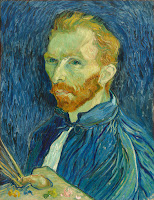 The project this time was portraiture, and the organizers chose this fantastic Van Gogh portrait as the point of departure. My role was to discuss the artist with the kids, give them a chance to talk about what they saw in the painting, and to demonstrate for them how a copyist works to re-create a painting in real time. I worked with several groups over the course of two days, and in addition to Vincent, we talked about other portraitists both within the NGA and without. I discussed Amy Sherald's incredible portrait of Michelle Obama which hangs at the Smithsonian NPG. Many of them had seen it, and all of them lit up when shown an image of that painting. This session happened during the aftermath of George Floyd's murder. One of Amy Sherald's driving principles is that skin color is what we make of it. Her portraits have skin tones greyed out, making the point that we are all the same color, just different shades of light and dark. 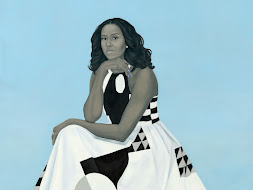 As for Vincent, he's green--and the kids took that idea and ran with it. I wish I had images of their work, which truly turned out far superior to my own. Below is my setup for the first session and near completion on the second day. 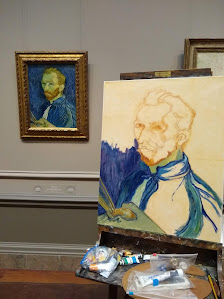 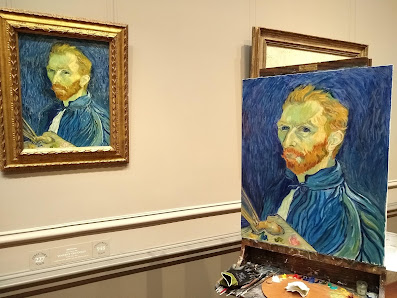 This was February 2020. I was already seeing more international visitors wearing masks, and was just starting to wonder how concerned I should be about Covid, since as a Copyist, I was constantly engaged with people in the gallery, having animated discussions about my work, the art and the artists--my favorite part of the job. Then a month later, official lockdown began, and everything closed down. Even now I don't know if this program was reinstated after things opened up again. My husband and I left DC after a full year of hard isolation, just as soon as we were vaccinated.
I hope that this won't turn out to have been the last time I set foot in the National Gallery, or the last time I paint there. It is the last time for the foreseeable future. Here's a photo from happier times.
Photo credit: Sandra J Cohen (a great portraitist) 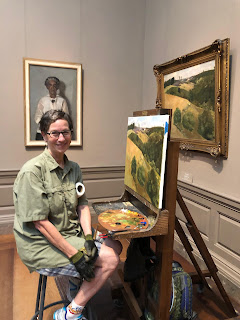