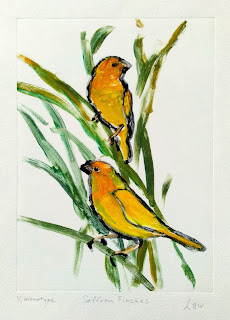 These are Saffron Finches, lovely color notes in Hawaii.  All three of these are hand-pressed gouache monotypes, image size 7" X 5" SOLD 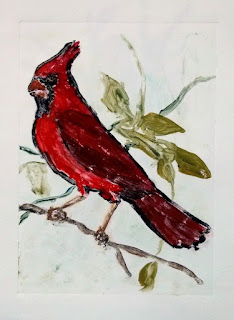 Northern Cardinal, and yes, they're here!  Not a lot of them, but fairly common.  Both these species were introduced. 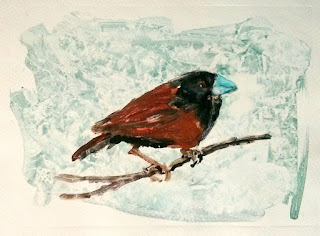 This little finch is a Chestnut Munia, originally from the Philippines.  They are not plentiful here, but a welcome addition. I've only seen one since we moved here. Their beaks really are blue.
Posted by kathrynlaw at 9/30/2015 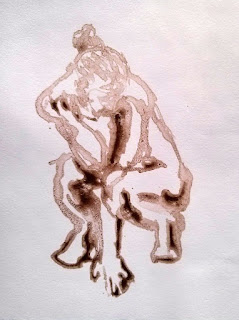 Drawn from the model with a bamboo pen (in water-soluble walnut ink) on frosted mylar, then transferred onto soaked and blotted Johannot printmaking paper. Approx. 6" x 4" 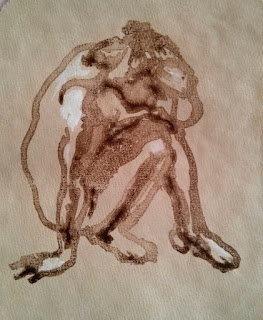 Same as above, but the plate was heightened with gouache and printed onto toned Ingres drawing paper.  The paper adds its own element of texture, especially in hand-pressing. Approx. 5" x 4"
Posted by kathrynlaw at 9/28/2015 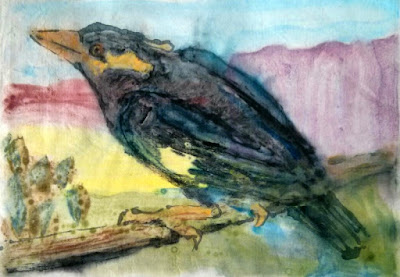 There are myriad variables with each image--what medium to paint in, what paper to use... even differing degrees of dampness in that paper will determine how sharp the resolution is and how much color transfers.  This is on kitakata paper.  The background was printed first, the bird transferred from a second plate, then some details added with an ink brush. 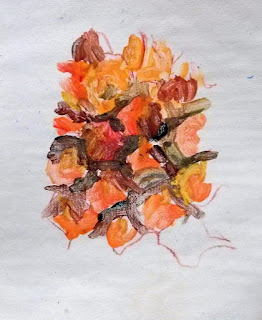 This is a simple study of the outside surface of a pineapple, done in gouache and printed on drawing paper.  Monotype is known as the "painterly print."  Each impression is unique because most all the paint comes off with the first print, so they can't be duplicate-printed.  The main advantage is that the process allows the introduction of textures which can't be made any other way. 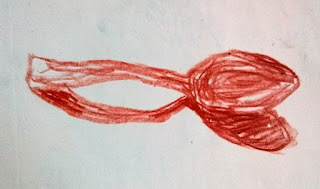 Spoon and shadow, Neocolor II water-soluble crayon on frosted mylar, printed on Rives Lightweight printmaking paper.  Heavyweight papers are great if you have a press.  Working by hand, lighter-weight papers respond better to less pressure.
Posted by kathrynlaw at 9/23/2015 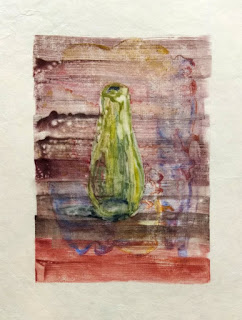 I've been playing with hand-pressed monotypes, a process I've loved since art school.  It really changes things up.  I don't have a press, so these are pulled by hand.  The above plate was painted in watercolor, three layers, left to dry, then printed onto soaked and blotted Japanese kitakata paper. Image size 7" x 5" 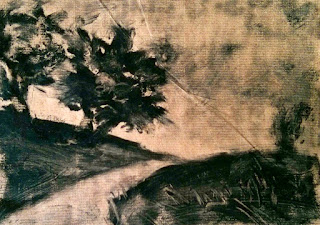 This is a drawing in black Oilbar on the plate, printed onto toned drawing paper (which didn't like the punishment).  This will become a chine colle'.  Approx 4" X 6"

Mourning Doves.  On the right, the image was drawn subtractively using black Oilbar.  That image was the source for the plate on the right, painted in black gouache.  Both are on Johannot, and reveal interesting differences.  Textures and effects are possible in monotype that can't be achieved with any direct method. And pulling a print is like opening a present:  you never know what you'll get.
Posted by kathrynlaw at 9/20/2015

Day at the Beach 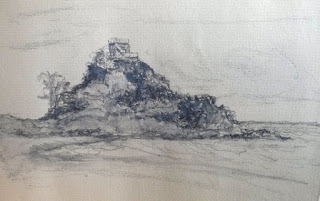 Pyramid Rock, on the Marine Corps Base Hawaii at Kane'ohe. The storm surge was just starting, from the latest of many hurricanes this year.  Water-soluble graphite. 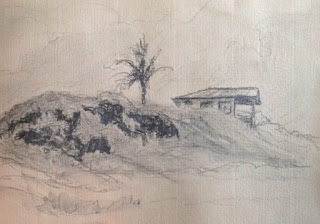 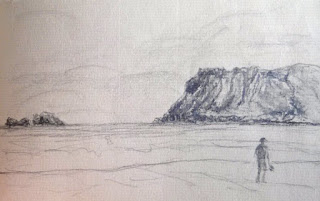 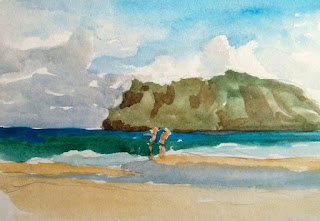 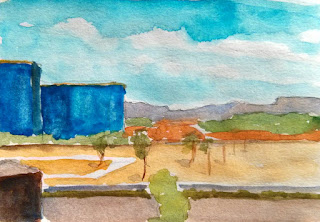 Hard Rock Hotel seen from my room, with a huge empty lot and remains of a foundation and parking lot in between.  Looking a little post-apocalyptic. 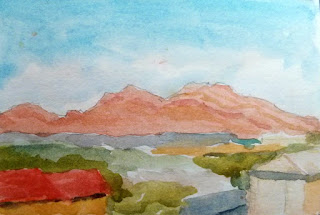 Mountains to the east. 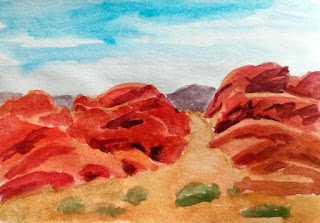 This is a small sampling of what you will see at Valley of Fire State Park, about an hour northeast of Las Vegas.  A range of impossibly red rock formations have emerged from the desert thanks to eons of erosion.  The color is astonishing, and the rock is carved by the wind and blowing sand into fantastical shapes.  Nature creating her own version of a Gaudy Hellscape.
Posted by kathrynlaw at 9/14/2015 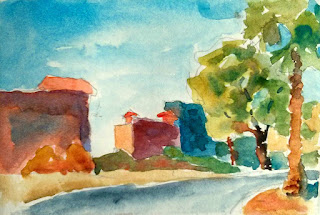 One writer documenting DefCon referred to Las Vegas as a "gaudy hellscape", which I think is the most perfect description ever and not in a bad way.  The artificial colors everywhere heighten awareness of all the natural colors too (and the desert heat can certainly conjure up an inferno).  This fairly ordinary scene behind the Tuscany Hotel is enlivened by the amazing colors of the buildings, and by my near-delirium due to the 110-degree temperatures. 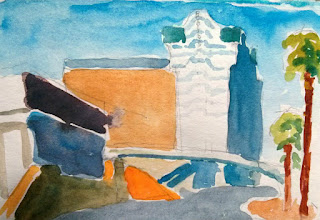 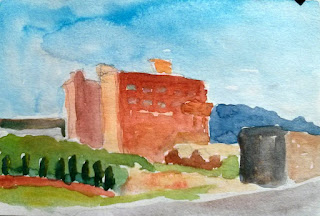 One of the (fairly normal-colored) hotels where we stayed.
Posted by kathrynlaw at 9/12/2015

A ten-day trip to Las Vegas last month produced some new little watercolor sketches, plein air.  Hotter than blazes, the paint dried almost before it hit the paper.  The colors are amazing in the thin desert air. 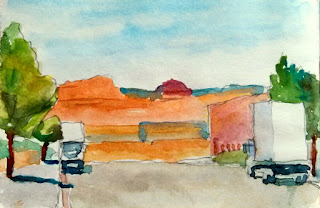 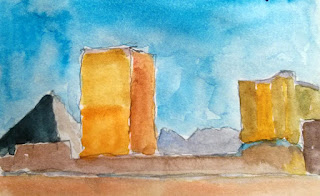 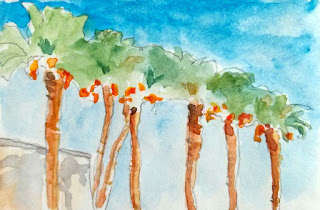 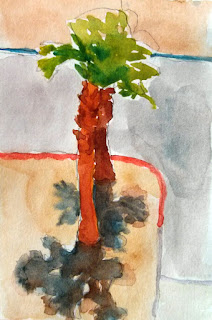 Looking down from the hotel room.
Posted by kathrynlaw at 9/10/2015

Hawaii is home to many species of birds, but not all of them started out here.  Residents now, but at one point, alien invaders.   All below are watercolor, all painted from life. 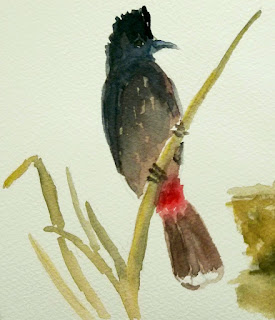 Red-Vented Bulbul.  These, along with Mynahs, are the most plentiful birds on the island.  Not so welcome.  Considered invasive, injurious to native species and plants.  Native to Asia, illegally introduced on Oahu in the 1950's.  They are *everywhere*.  The other islands either don't have them, or only a few (so far). 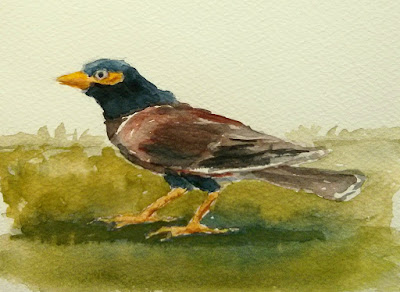 The Common Myna(h), also an Asian import, is so ubiquitous that many people don't know they didn't originate here.  Believed to pair for life, they are extremely prolific and displace other birds, even robbing nests.  Mynahs are related to starlings, and their huge gatherings generate quite a lot of noise.  They are funny and endearing to watch, though, so it's hard not to love them.  We don't have crows here, and I miss them. 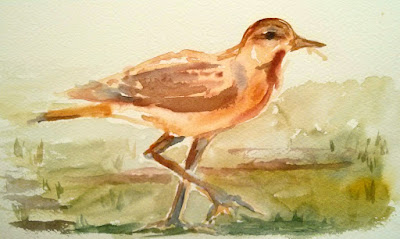 NOT an alien.  The Pacific Golden Plover, also quite numerous, is a welcome migratory species.  Breeding season is spent in northern Alaska, then they winter in Asia, Hawaii, even Southern California. They are seen everywhere here in the fall and winter, even on grassy areas in very urban environments.  This one was fast-moving, the painting was done quickly with no drawing.