Besides the "Bridge Repair" painting in my last post, these are the works I did at Whiskeytown. 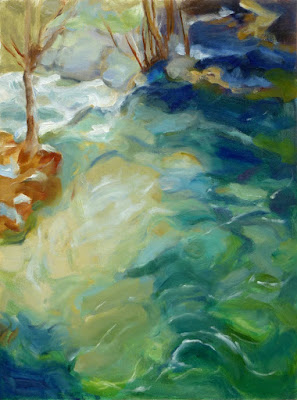 Brandy Creek, 12" x 9" oil/canvas panel.
Much of Whiskeytown's history revolves around the water.  Brandy Creek is crystal clear, because the waters are snowmelt and rainfall runoff.  Looking down into the creek from a bridge, the full depth is visible as it heads off over the rapids at the upper left. 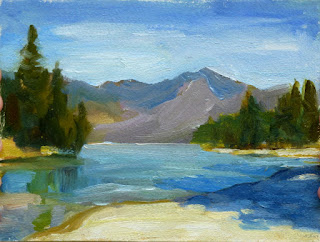 Brandy Creek Beach, 6" x 8", oil on primed watercolor paper.
This is where the creek empties into the lake, not far from the Bridge Repair painting in the last post.  The lake is often mirror-like if there are no winds, almost impossibly beautiful and very different in appearance when one is used to painting ocean!  In the summer, this beach is full of people.  In March, still a bit too chilly. 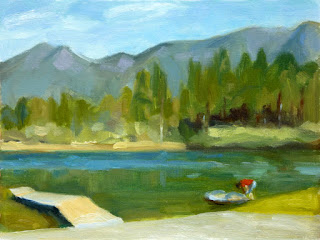 Whiskeytown Boat Ramp, 6" x 8", oil on canvas panel.
The lake is vast and very much enjoyed by sailors and kayakers. 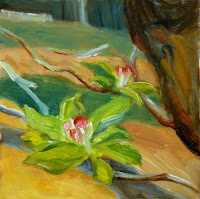 Apple Blossom, Camden House.  6" x 6", oil on Ampersand gessobord.
The abundance of water in the area made it possible for extensive mining operations to spring up in the 1800's.  Levi Tower and Charles Camden were partners in mining ventures, and Tower established a renowned hotel where guests enjoyed fresh fruit from orchards he planted on the grounds between Camden estate and Tower House.  Over 160 years later, many of the apple trees are still alive and producing fruit.  Not far from the orchard, Levi Tower's gravesite is surrounded by a low white picket fence.  That's it, in the upper left corner of the painting. 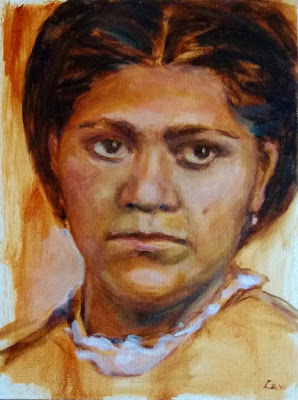 Kate Camden, 12" x 9", oil/canvas panel.  Collection Whiskeytown National Recreation Area.
Kate Camden was a native Indian girl (possibly Wintu) who was brought into the Camden family to care for the Camden daughters.  To me, she represents the intersection of the two cultures.  Not much is known about her (a research project is underway), and only one photograph survives of her as an adult.  That photo was the basis for this painting.  Young Native Americans were frequently exploited by the white settlers of the time, but that seems not to be the case with Kate.  She was well loved by the Camdens, who gave her their name but did not formally adopt her.  She died at age 27 of unknown causes, possibly from TB or typhoid.  Her gravesite is also on the grounds of Whiskeytown. 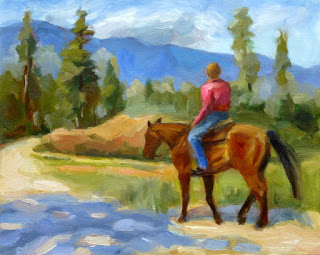 Rider near Horse Camp, 8" x 10", oil/canvas panel.
Miles and miles of trails wind through Whiskeytown, with expansive parking areas for horse trailers.  I saw a lot of riders enjoying the park, and wished I could join them. 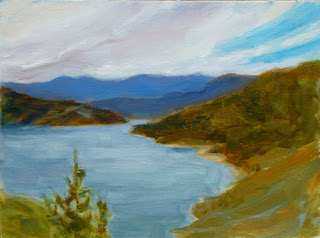 Lake from the Visitors Center, 6" x 8", oil/canvas panel.
This was a demo on Easter Sunday, with many visitors in attendance.  The sky was overcast and the lake had a subtle, moody look.  The weather is very unpredictable and changeable at the park, at times it seems to have its own climate.  It's sublime, in the 19th century sense of the word. 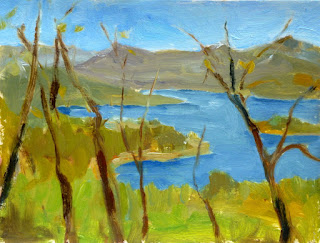 First sketch, 6" x 8", oil/primed bamboo paper.
The first day of my residency, I climbed the hill near the Artist Cabin.  I found watertowers at the top and a great view, looking through treetops.  Spring green everywhere.
Posted by kathrynlaw at 5/14/2016