This is a lovely Rembrandt portrait at the National Gallery, and a copy was commissioned by the good people who bought my painting of the Lievens Bearded Man. 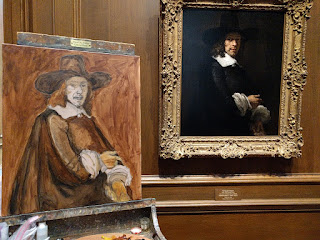 We do not know the identity of the sitter, it hangs side-by-side with this portrait, and it seems that this pair of portraits might be husband and wife. Rembrandt made many portraits of wealthy Dutch people who are not known to us now. This pair of portraits has a very interesting provenance involving the Yusupov family, surviving both the Napoleonic invasion of Russia and the Bolshevik revolution. The paintings were taken off their stretchers, rolled up and smuggled out of Yalta aboard a British ship. They are now part of the National Gallery's permanent collection.

I'm three sessions into the Rembrandt, and the work is coming together. It's a difficult painting to work from even in person, because the dark parts are very dark. It's not due to old varnish, this painting had a complete conservation in 2007; but the contours in the drapery have darkened to near-imperceptibility. My guess is that Rembrandt used lead white as a lightener to describe the folds, and that has now darkened and become nearly as black as the areas around it. The high-res image on the NGA website is actually much better, because it was taken under very bright light which reveals more of the contrast than can be seen in person. Another very interesting fact about this painting is that it was transferred from one canvas to another (not relined, actually transferred) by a Russian conservationist during the 1800's. It wouldn't seem even possible, and is not a method that modern conservation would employ (since all modern conservation measures MUST be reversible), but it was commonly done then. Here is a link about the process to transfer a painting from one support to another, among the riskiest procedures ever used. Here's a link to the technical notes about this specific painting. 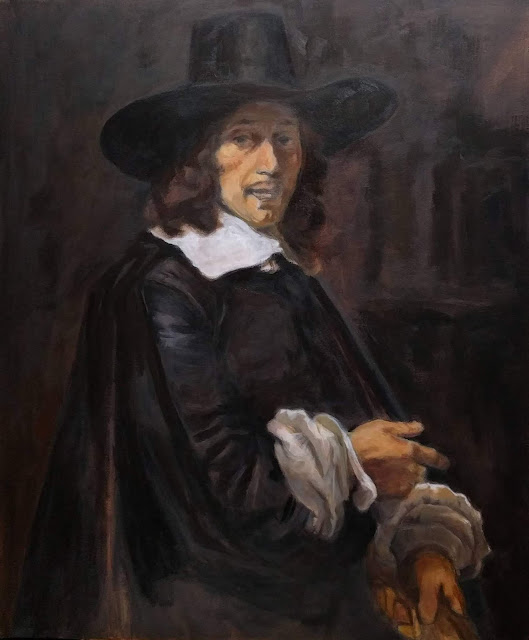