When you look at Peggi's beautiful work, the first impression might be that they are all about color.  And the color is radiant, but the greater key to their success is value.  Value is the foundation that successful paintings are built on.  Frequent readers of this blog know that I've been focusing on this principle lately, so the timing of this workshop couldn't have been better.

We started each day with ten 1-minute semi-blind-contour drawings of a model (using an "I'm committed!" ink pen), to warm up and get our right brains relating to the figure.  I'll post some of mine in tomorrow's entry.

Peggi's extensive background as an illustrator means that her drawing skills are top notch.  She began by giving a review of how to determine correct proportions of the figure in a landscape, and in relation to other figures. 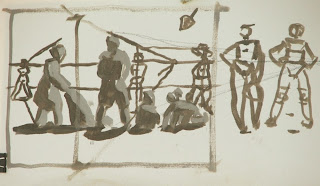 Human adults are typically 7 1/2 to 8 head-heights, with a fairly predictable proportion.  Peggi reviewed where body "landmarks" typically fall within the overall height, and showed how to use simple one-point perspective to position other figures within a scene (instead of using trial-and-error like many of us do).   In this illustration, she's already showing how to model the form with two values after determining the light source (arrow at upper right).  The value plan is what lays that foundation.

Here are examples of value plans that Peggi has done to visualize the layout of a painting:

These plans using two, three or four values resolve all the composition questions before the final painting is even started.  Notice in the panel on the right that once the value composition is decided, the sketch can be used for trying out color swatches to confirm that the value is what you want, before you put it down on the final painting.  How light or dark should the colors be to stay within your value plan?  Mix them, try them against your value sketch, and adjust them.

Here's one of Peggi's vivid examples of how a value plan contributes to the success of a painting: Values established, the simplified composition in the painting at right allows the viewer to focus on the figure's gesture and form without the distraction of the ground shadow.

We had two lovely models to work from, and some cooperation from the sun.  We did four two-value sketches of the models against a white background, to recognize light and shadow while keeping the figures proportioned and correct relative to each other.  These were 20-minute poses. Here are mine: 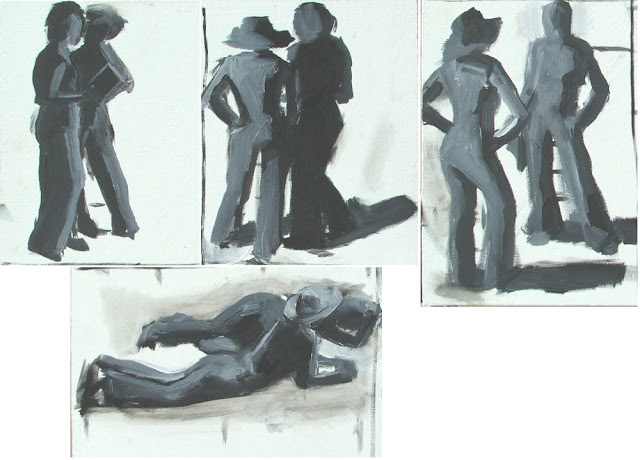 Not bad, but when the models were lying down, I slipped up on the landmarks for the near figure and made her legs too short.   It's important to lock in the drawing before worrying about value.

After lunch, time for color.   By this time, the clouds had rolled in and we had no direct sun, so Peggi did a demo using local color to establish value instead of sunlight and shadow.  In the snapshot of the early stages (at left), you can see that she begins with a monochromatic underpainting to mass in the darks of the value plan, and then applies color over it.

And then, we caught a break when the sun came back out for our two painting sessions that afternoon.   The assignment was to keep to a two-value scheme for the figures and shadow, with possibly a third value in the background. Within one value "family", forms can be defined and modulated with color rather than value.  Compositions are more successful when value groupings are simplified and consolidated rather than being scattered all over the picture plane. 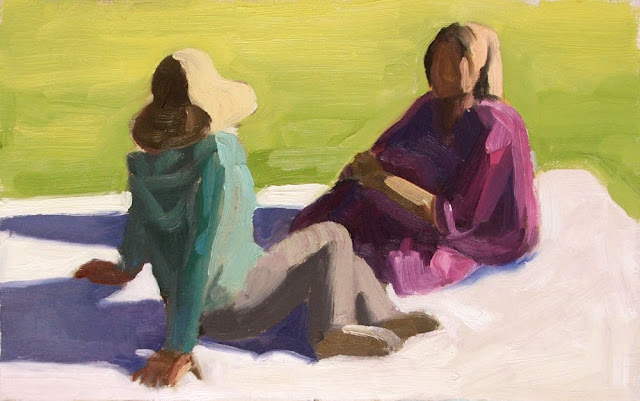 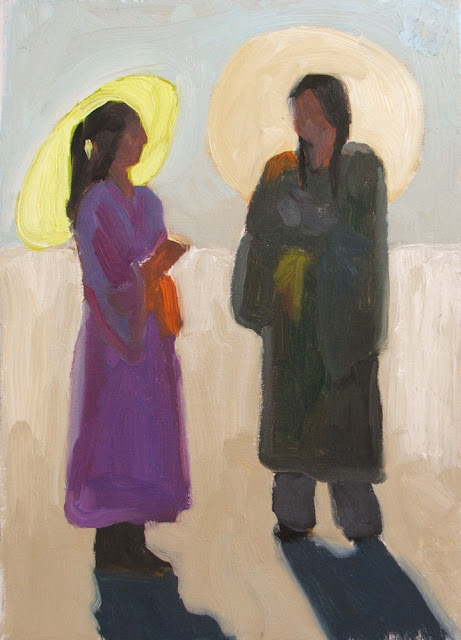