Here are two portraits of the same sitter, and a story to go along with them. I'll start with the one that I feel best captures who he is. 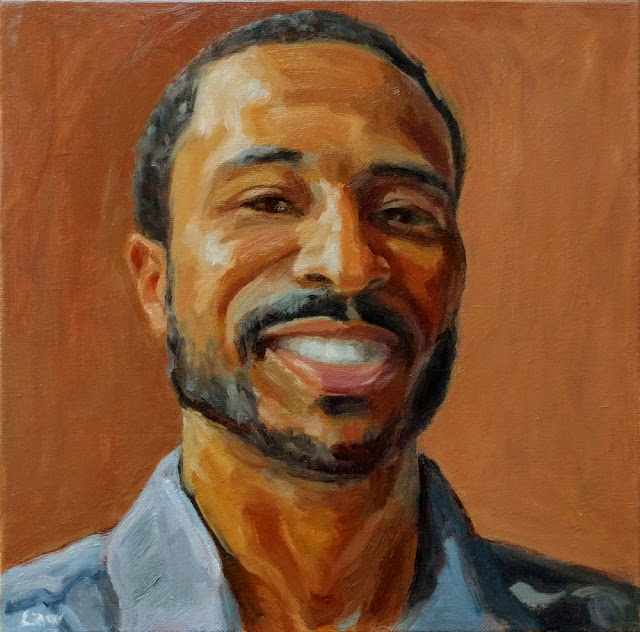 He's confident, happy, has a megawatt smile. He's also a busy professional with very little free time. He's a football fan (Go Redskins!), so when he came by for a sitting, he asked if he could listen to the game on headphones while I sketched him. I always want people to be comfortable and at ease while I'm working, so I said sure! Unfortunately, the team missed a field goal and fell behind, so the expression I got was actually more like this: Not that there's anything wrong with that, I was very taken with the drama that unfolded on his face, but I struggled terribly to complete an accurate likeness (later repainted it 8 times, and then abandoned)--because this really isn't who he is. Fortunately, I had time to chat with him enough to get to know him, and took some reference photos--one of which enabled me to get the likeness in the top image here.

Yesterday I happened to talk to another portrait painter while painting at the National Gallery, and she mentioned how difficult it is to get people to come for a live sitting at all any more; they would rather just submit photos. People are busy, which is understandable, but a portrait painted from a photo without the benefit of "face time" with a sitter will never capture the same energy and character. There's something sublime that happens between the subject and the painter, that makes it possible to portray the sitter's best self: a blend of how they see themselves, how the painter sees them, and the essence of their personality. I am glad I had enough time with this guy to get to know him a little, because that's what saved me.