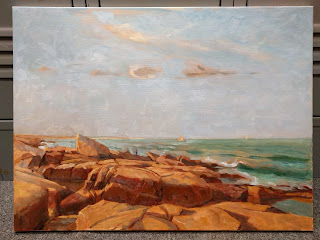 Fourth session was mainly about final decisions on composition, especially related to the rocks, figuring out where problems still existed and fixing those. The sky and water seemed like they'd be the easier problems to solve. (Ha!) At this point I finally have the horizon close to where it should be and it feels like the diagonals and interaction of the rocks are beginning to work as intended. 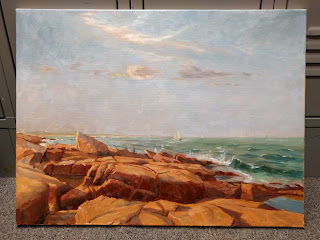 Fifth session, about 20 hours into it at the end of the day. Beginning to resolve the sky and water, but still not happy with the color. This photo is in poor light so not accurate, but Haseltine's sky palette actually was very subdued. It's difficult to know how much of that is due to time and varnish, but the work looks remarkably fresh for its age, and its provenance would support that impression, so now I have a decision to make. Do I mute those blues and greens all the way down to the point that he did? So many visitors have said that they like aspects of my work better than the original (even saying that to the guards, so they aren't just being nice to me)...  Maybe it's okay if my copy has a little bit of my style in it.