The Path to Enlightenment 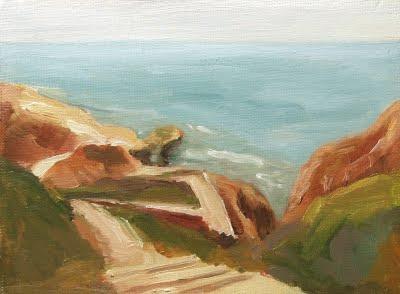 6" X 8", o/cp
This is part of the path that winds its way along the tidepool shore, down below the lighthouse.  The path itself is such a beautiful thing; up and down, back and forth.  The maintenance of the path is also an important part of arresting the erosion of these fragile sandstone cliffs.  Out to sea, there's a clear view of that vast (and vastly important) kelp forest. 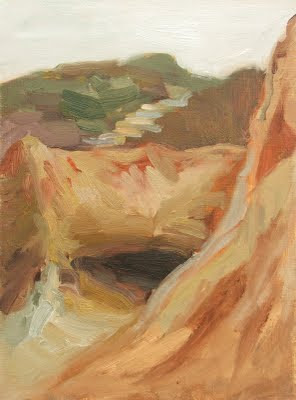 8" X 6", o/cp
Near the end of the path is this small, natural, smooth-walled cave worn into the sandstone cliffs, a product of the erosion that is happening in "real time"--as I sat there painting, little chunks of sandstone would softly break loose and roll down from above. 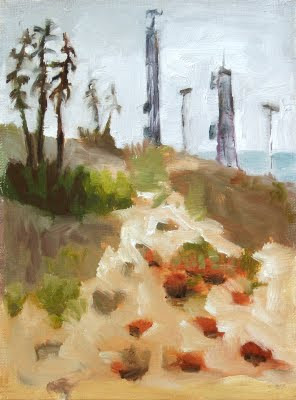 8" X 6", o/cp
Another look at the Shaw's Agave and radar towers, still exploring that juxtaposition which seems so emblematic.
Posted by kathrynlaw at 8/29/2011 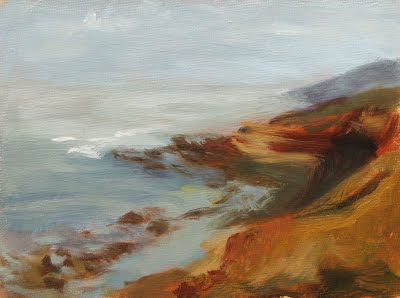 The Monument is an incredibly beautiful nature preserve.  These tidepools are where I did my first-ever plein air work four years ago with my brand new paintbox, the same one I use now on the bike.  There is a kelp forest right here that is the largest in the northern hemisphere, 8 km long and 1 km wide. 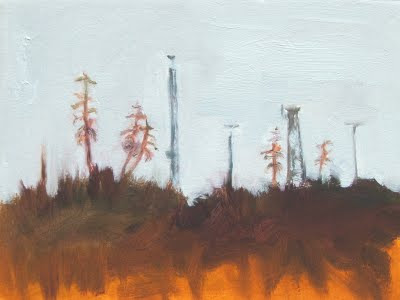 Cabrillo Point is a natural location for defenses such as the Navy's radar towers.  A theme that I'm exploring during this residency is the coexistence--actually, the mutual benefit--of natural and man-made elements.  I'll talk much more about this as the concept expands.  Radar towers aren't conventionally attractive, but I think they are beautiful when juxtaposed with the organic forms of this rare Shaw's Agave, an endangered plant. 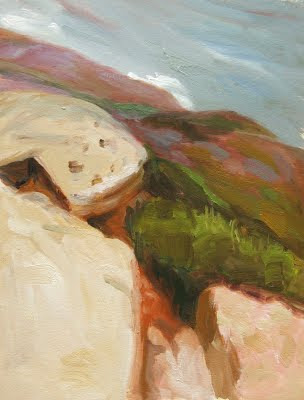 During WWII, Cabrillo Point was the site of artillery installations and "control" (lookout) points like this one to help the batteries direct gunfire.  These are fascinating structures, sculpted in concrete to match the surrounding cliff.  This painting doesn't illustrate the structure very well--we're standing on the cliff looking down on the station, with the tidepools far below.   Here's a pencil sketch of another station a little further south; and on the crest just beyond, another radar tower and more agave overlooking the ocean: 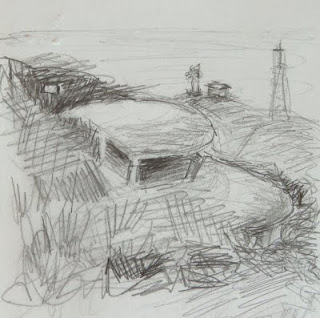 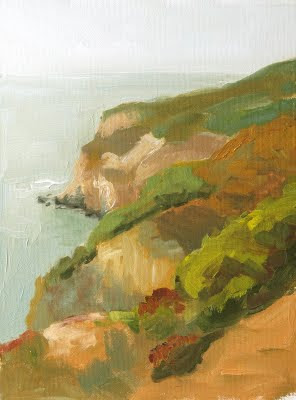 I'm the first Artist in Residence at Cabrillo National Monument, a new program for them.   Many national parks have AIR programs; each of the larger parks hosts a dozen or more artists each year.   Cabrillo is relatively small, but loaded with significance.  Several months ago, I suggested to them that they should consider having an AIR, and sent along my resume and portfolio.  It took some perseverance to get approval through all the channels, but things finally fell into place and here we are.  I'm the first of (hopefully) many.  This place has deep meaning for me personally--it's where I did my very first plein air paintings in 2007, and have painted there countless times since.  In a historical/cultural context, it's a very rich and important place.  I will have the opportunity to explore that in depth now, and I'll talk about it here.

First and foremost, it is where Juan Rodriguez Cabrillo landed in 1542--the first point of European contact in California.  He made landfall not far from the cliffs shown in the painting above.

The Monument is also a very important preserve for native plants, birds and animals which are now endangered everywhere else.

My residency will culminate in a series of larger, more finished studio works, but there will be lots of these small plein air studies in the meantime:  color notes and explorations of subject.
Posted by kathrynlaw at 8/21/2011 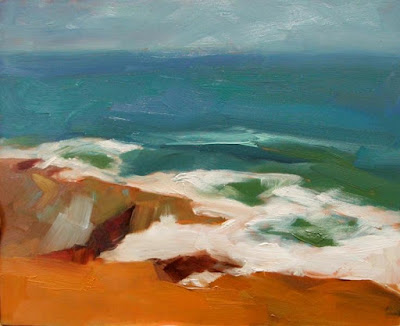 8 X 10", oil on panel.  Often when I'm painting by the tidepools, visitors ask where they are.  They're hidden by high tides, which is why they thrive.
Posted by kathrynlaw at 8/13/2011 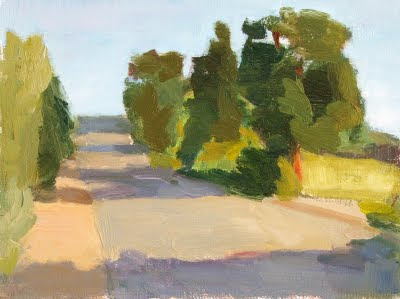 6 X 8" o/cp.  Sunny morning means plein air by bike!  This is looking north on Cabrillo Memorial Drive, around 7 am. 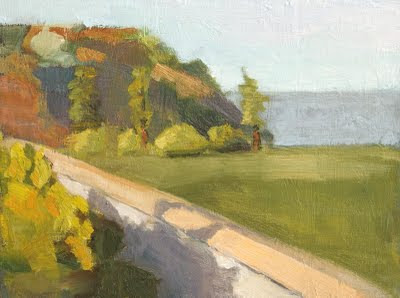 6 X 8" o/cp.  Looking south toward Cabrillo National Monument, with the wall of Ft Rosecrans in the foreground.

I'm delighted to be the first Artist in Residence for the Monument, so there will be many more views of the park soon to come.
Posted by kathrynlaw at 8/06/2011